"You say you want a revolution
Well, you know
We all want to change the world"

- "Revolution" by The Beatles

The Soviet Union took a beating in the later stages of the Third World War, unable to keep control of France, Italy, the Low Countries and much of Germany. Heavy losses of men and material have hit them hard, not to mention the mysterious disappearance of their top scientist and the bizarre flight of Premier Cherdenko into the endless depths of space; they are beginning to feel the weight of several years of fighting.

Forced to revert to some older technology to fill the gaps, the Soviet Union has desperately sued for peace, at least for the time being. Despite this, the Soviet Union still has some tricks up its sleeves, and new technological developments combined with huge amounts of heavy armour and walker units have cemented their mastery of land combat.

At a Glance[edit | edit source]

In 1924, a man known both for rebuilding the country and mass-murder, Joseph Stalin, became the "General Secretary of the Communist Party of the Soviet Union". Stalin's goal was to recreate and modernize the Russian country, now internationally known as the Soviet Union. But he had another goal. Under the influence of mysterious advisers who continually drugged him to affect his mental health and drove him from his prior socialism in one-nation policies, he came to believe that the West was preparing an imminent assault on the motherland, and with extensive propaganda and selective usage of facts, the Soviet people came to believe this was true.

On October 31st, 1949, Soviet tanks rolled over the Union's borders directly into Polish territory. While the European states remained over the recent years in a state of petty international conflict and mistrust, Stalin attacked the unsuspecting Polish and it took about two months to fully conquer the entire country. With weak infantry weapons without anti-vehicle support, ancient propeller planes from the early days of World War I, and antiquated strategies like bunker lines, the Polish proved to be no match against the red iron of Stalin's Red Army.

With Poland gone, the next target was the reborn Kaiserreich, better known as Germany. Still limited to a standing army of 100,000 men and no heavy weaponry or strong naval forces allowed, the Germans unveiled their trump card - their own tanks. The mechanised counter-assault proved more successful than expected, and the German border could be held long enough for the European leaders to hold a conference and find a solution.

For years, Poland and Germany were entrenched in brutal warfare, until it seemed all of Europe would fall. At that time, the European leaders had already come up with a plan. Almost literally out of the blue, new tank designs in blue steel appeared, infantry divisions who would have fought each other 2 years ago if necessary stood together and ambushes surprised the formerly victory-sure Soviets.

In a game of cat and mouse, the Soviet assault was first halted, then pushed back all the way to the original borders. But, for one reason or another, the new Allied Nations would not go any further. Stalin, who was found dead in his office nearing the end of the war, left a letter behind designating his successor, Premier Cherdenko. This man was all too eager to end the war and negotiate peace with the Allies.

Preparations for another war[edit | edit source]

Cherdenko was not the type of man the Allied Nations hoped, however. In the time between World War II and III, he ordered another increase in the military to make up for the losses under Stalin, and with modernised designs, soon ordered an attack on his own. World War III was to eclipse the prior war in scale. As a matter of fact, it went even more successfully than the prior one. The Soviets would attack Europe, fire their way through the Allied lines and end up in front of Great Britain after becoming masters of continental Europe; getting farther than Stalin ever did.

But this time, a long forgotten country in the north-east of Asia made its appearance. The Empire of the Rising Sun, as they named themselves, attacked the moment Cherdenko wanted to order the final wave to conquer Britain. The world taken by surprise, the Soviet Union now faced two enemies. Nearing the end of the war, the Soviet Union was pushed back once again, but effectively gained territory in Europe by holding the eastern side of Germany and Austria and effectively most countries eastward.

In one last attack, the Allies tried to take Premier Cherdenko capture, who managed to flee into space, however. His fate is unknown.

Cherdenko's successor, Davidova, had the burden to negotiate peace with the Allied Nations like her predecessors did, and was faced with mistrust. However, Davidova managed at least a cease-fire with both power blocks, who were just as exhausted from the war as the Union. The Allies made no attempt to reclaim the eastern parts of Europe, much to the dissent of the people living in these regions. With all three powers done, new powers in the world made their way up to the world stage. Will Davidova lead her Union to a new era of peace and understanding? Or will the path only lead to more struggle? Only time will tell.

The Soviet Union will be in the second faction release along with the Empire.

The faction, including the new elements from Red Alert 3 Paradox, will have a total of 15 buildings, 8 defensive structures and 55 units (13 infantry, 12 vehicles, 11 tanks, 5 drones, 7 aircraft, 7 watercraft). 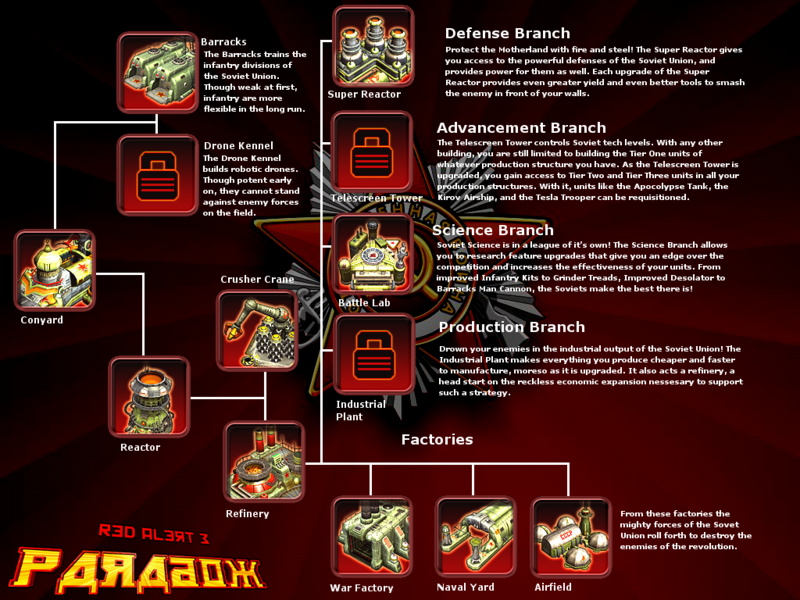 "How is the Red Army like a bear? So the joke goes, and the answer is nowadays “Sleepy, naked, and with bad breath”. Because, after all, has not the Red Army been beaten Black and Blue, has not the Union been forced back in two world wars, has not the Union been led by piss-poor madmen for decades?!...But indeed the Red Army is like a bear, for a bear is tough, it is armed with dangerous weapons, and it is fast...very fast. Foreigners and detractors may laugh at a bear that is in its cage, but when that bear is charging towards them across open ground at sixty kilometres an hour with ninety tonnes of steel and cannon behind it, they will more likely run. And when there are eighty bears, they will run harder."

Elements in italics in the list designate Paradox-Exclusive units and structures.

A list of protocols used by the Soviets. Those are tied to non-production structures. How they upgrade is not decided yet.

Retrieved from "https://paradox-modfanmadebackup.fandom.com/wiki/Soviet_Union?oldid=7987"
Community content is available under CC-BY-SA unless otherwise noted.