"The days when you were crazy,

Are the fragments of your dream.

I can see it, your courage."

- "Otokotachi no Nadesico" - "Men of the Nadesico"

The Empire of the Rising Sun, also known as the Empire, the Japanese, or Japan, is a previously existing faction being expanded upon for Red Alert 3 Paradox. The original faction was designed and created by Electronic Arts.

At a Glance Edit

Late Emperor Yoshiro was a man of honour. A strong traditionalist, he followed the code of Bushido, the way of the samurai. He knew, with dedication, endurance, a sharp mind and a honourable way of acting as well as hard training, a warrior can reach victory no matter the odds. Self-sure, he placed his ideal above everything else, and formed the military in this way. He believed in the divine destiny which meant the Empire with him as the leader is supposed by the Gods to rule the world. Most of his commanders were Shogun themselves, knowing the way of Bushido, and transmitted this codex down to even the most common soldiers.

Crown Prince Tatsu, the only son of the Emperor, thought in a different direction. To him, it was not dedication of honour what mattered, but the force and number of the weapons of the warrior wielding them. This new-age thinking along with Tatsu's brilliant mind as an engineer and tactician often clashed with his father's beliefs.

The result was a combination of both traditionalism and technological advance. Weapons designed in the style of 100 years ago were combined with modern Nanotechnology, basic soldiers wielded both mid-ranged firearms and katana, Shinobi fought alongside unarmed men in white business suits and even women were seen on battlefields, or actually above them.

The military was by far and about the largest contractor and scientific drive in the Japanese community, which was almost completely isolated after the short appearance it made in World War II, where crude Mecha fought in a few battles alongside the Allied Nations.

Forgotten from the outside world, the Empire underwent a dramatic inner change. Ever heavier militarized, even more so than say the Soviet Union, the mere bulk of willing soldiers grew every year by a large margin. The technology allowed it. Modern computer systems, utilizing a technology named Integrated Circuit, allowed computer systems to become smaller and cheaper while at the same time becoming more effective. Soon large banks of computers were installed all over the Empire, controlling nanobots and vehicles, production assemblies and household goods with a high degree of accuracy and they could easily be expanded.

Radio signals in the air, decoded by military structures, contain the data for Nanotechnology to form all the assets needed on the battlefield while Imperial men in the millions stand ready to serve and if necessary give their lives for the Emperor. Giant battleships, accompanied by small submersibles and amphibious tanks trained in the open seas around the Empire, while the scientific community created more and newer weapons for the warriors. Structures could be assembled in record time with Nanocores driving around in search for expansion posts, even on water. Giant artificial islands, some mobile, were built in underwater stations and outfitted with one of the most destructive technologies available, all the while remaining a secret to everyone else.

Shinobi and humanoid robots spied in the leading cadres of the world, changing and deleting information about the giant storm in the east, and while the Allied Nations and the Soviet Union were busy with each other a huge ambush plan was initiated. Then, when the Soviet Union was careless in its hour of victory, the Empire attacked like a tsunami with a wave of tanks by the same name, supported by the newest generation of Mecha, battleships and battalions of infantry already placed around the globe. No one noticed, no one expected, and no one survived the first wave. Taken completely by surprise, Emperor Yoshiro himself opened the first act of the Empire by giving a life video message to Premier Cherdenko of the Soviet Union.

"You will bow before us or you will cease to exist!"

The war for the divine destiny had begun.

After the war, the Empire was in despair. Both Emperor Yoshiro and his only child, Crown Prince Tatsu, died in their own battles. With no members of the Imperial family left, a Shogun by the name of Shiro Kamina took over and became the new Emperor. Quickly lofted into the nation's hearts and minds, he was widely accepted into the position almost instantly, and things are looking on the up-and-up for the Empire for the first time since they entered the war.

But there is a lot of damage. The Empire has to work hard, now more than ever, to repel its numerous enemies. Most alarmingly, the new, strange army of the Atomic Kingdom of China seem hellbent on the Empire's destruction. Tensions with the Soviet Union remain high, and with Japan's entry into the international market it is facing stiff economic competition from the Mediterranean Syndicate.

Unlike Yoshiro, Emperor Kamina tried to form a steady peace with the Allied Nations instead of only a cease fire, which the Allies thankfully accepted. Since then, many changes have occurred in the Empire, as the insular island nation has opened up to foreigninfluences and has also begun to make its presence felt on the world market. This does not mean that the Empire has become pacifist, or given up on its dreams of a world spanning Japanese Empire; the truth is quite different.

Emperor Kamina simply changed the agenda of the Imperial military into a defence force, so that instead of acquiring more land the military defends the Empire with its life. With the advice of Shogun Shinzo and under the leadership of young Kamina, the Empire will head into a new era of prosperity.

With the Allied Nations on their side, a heavy exchange of culture and goods has begun. Household goods have become less expensive, television becomes more widespread and western exotic clothes are becoming more common in the Empire. On the other hand, the Allied Nations become ever more heavily technologized, with the modern computer systems from the Empire, nanomachines reconstructing destroyed cities such as Berlin, London and Paris, and the overall way of Japanese life becoming increasingly famous in the western countries.

Only the stars know how the development of the world will continue on with this new relationship.

The new Empire of the Rising Sun game elements will be along with the Soviet Union faction to reduce production time between the first and second packages.

The faction, including the new elements from Red Alert 3 Paradox, will have a total of 12 buildings, 7 defensive structures and 43 units (11 infantry, 11 vehicles, 9 mecha, 1 construction unit (counting the several Nanocores as one unit), 3 dedicated aircraft, 8 watercraft). 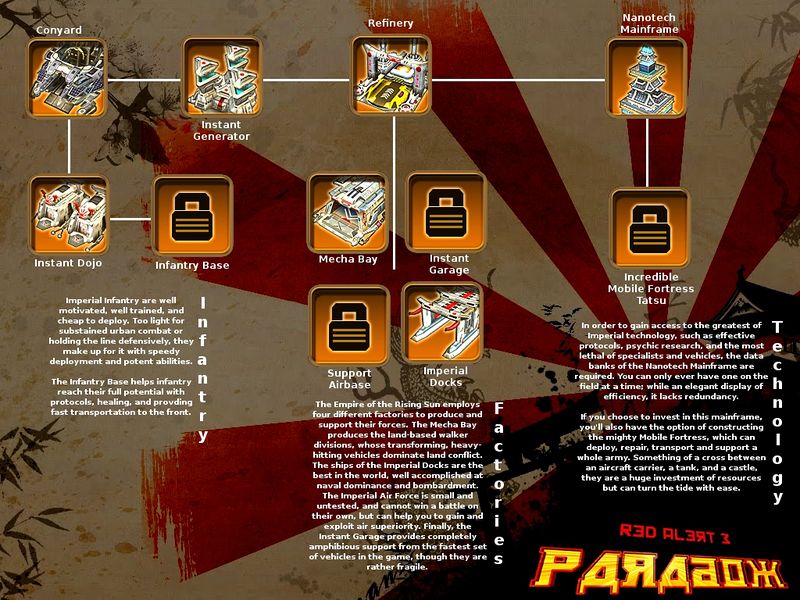 "Just as there is one Sun in the sky, so too is there one Empire. And under that one Empire, there is one Nation of people. And to protect that nation, there is the Defence Force. See the rows upon rows of loyal warriors, each one the pinnacle of their position within society! See the shining Mechanicals and Armoured Divisions, their paint bright and their banners gleaming with the light of the Sun! Listen to the roar of the glorious Imperial Airforce and the ripples left in the wake of the Imperial Navy, and know that together they will overcome any obstacle. Everything is in its place, and like a great machine it all comes together into one vast whole."

- Opening broadcast of the "Imperial Defence Force And You" show, which instructs and teaches Imperial subjects about proper interaction with soldiers and military officials.

Elements in italics in the list designate Paradox-exclusive units and structures.

(Produced at the Construction Yard)

Retrieved from "https://paradox-modfanmadebackup.fandom.com/wiki/Empire_of_the_Rising_Sun?oldid=8299"
Community content is available under CC-BY-SA unless otherwise noted.