"Pick up the cry,
Hey now it's time for you and me,
Got a revolution, got to revolution"

- "Volunteers" by Jefferson Airplane, written to support the Confederates

The Confederate Revolutionaries, also known as the Confederates, the Rebels or simply the Rebs, is a new faction exclusive to Red Alert 3 Paradox; it was designed by Open sketchbook and Kerensky287. They feature underhanded abilities and stealth gameplay to promote guerrilla warfare tactics.

- Motto of the Confederate Revolutionaries

The Confederate Revolution has its roots in the Federalist Party of the United States, which originated in the early 1950s with then-Senator McCarthy. After the death of former President McCarthy in 1957, the Federalist party was left leaderless and lost out to the Democrats under President Kennedy. When Kennedy stepped down in 1964, this gave the Federalist party a new opportunity under a charismatic, strong-willed leader, Howard T. Ackerman.

Ackerman was a legend in his own time, whose patriotic, anti-communist rhetoric, strong sense of community spirit and enthusiasm took America by storm. Ackerman defeated his opponents, Republican Barry Goldwater and Democrat Lyndon Johnson, by an unprecedented landslide.

When war broke out, Ackerman seemed to be everywhere at once. He rallied the United States into the fight immediately; unlike in the previous world wars, America would be on the forefront against Soviet aggression. Under his leadership America was able to prop up the failing European powers against the single largest army ever assembled and it is generally agreed that without him, Britain would have fallen to the Red Army. Ackerman was said to have worked tirelessly, sleeping in the Oval Office most nights so he could be beside the phones if an important message came through. He poured his heart and soul into ending the Red Menace once and for all.

When the Empire of the Rising Sun entered the war in spectacular fashion, the American government initially wanted to ignore the threat, which they deemed as relatively minor, and continue the focus on the Soviet Union. This all ended when the Japanese made a surprise amphibious assault on the coast of California, bringing the war to America's doorstep. The war dragged on for two more years, Ackerman reluctant to divide his attention away from his hated foe. That was when the most devastating blow was struck against Ackerman; the Soviets were suing for peace.

The war was over.

Ackerman was devastated. Finally ridding the world of communism was his life's work and it had been snatched from him without warning or, in his mind, without reason. Ackerman unveiled his secret weapon in response; a giant Spectrum cannon that had been built into Mount Rushmore during its construction, a secret gift to future presidents from President McCarthy.

Planning to reflect the beam off a network of orbiting satellites and onto Moscow, Ackerman was foiled by Commander Warren Fuller, who personally shot the President when he attempted to pull a strange bladed weapon on the peacekeepers arresting him. After his death, the Allied forces took control of the government, and, rather than allow a potential security breach, put their own candidate in government as interim president.

Each Allied boy must understand that they can't cross good Uncle Sam!

Away! Away! We'll all come up from Dixie!"

- One of the many catchy rallying songs of the Confederate Revolutionaries.

The Allies had underestimated the huge support base the Federalist party, and Ackerman himself, possessed when they took control of the government. Unlike Europe, fresh from Soviet control and willing to take any measures to ensure security, America would not tolerate a leader appointed by foreign powers over their own elected representatives.

The federalist headquarters in Dallas, Texas became the focus point of a new movement to take the country back, by force if necessary. Taking up the identity of American rebels throughout history, the Confederate Revolution descended upon Washington DC just in time for Independence Day, striking without warning. The rest, as they say, is history.

Despite rejection by the appropriate authorities, many Ranger Scout cars have been spotted in Europe. These rumors could be the result of an antique car fan club, or secret invasion. The seizure of Mastiff tanks and Beagles with UK flags painted on the sides has also been denied by the highest Allied authorities. Reporters also making claims of minor skirmishes in the Soviet Union have strangely disappeared, though whether the Confederates were involved at all is suspect.

Whether the Confederates will risk an open war on the Allies is unknown, but one thing is sure- their guns are cocked and men ready.

The Confederates are part of the first release of Red Alert 3 Paradox, coming out in the same package as the Allied faction. They have a total of 11 buildings, 10 defense structures, 9 fake buildings and 44 units (9 infantry, 10 combat vehicles, 9 non-combat vehicles, 2 construction vehicles, 6 aircraft, 8 watercraft). 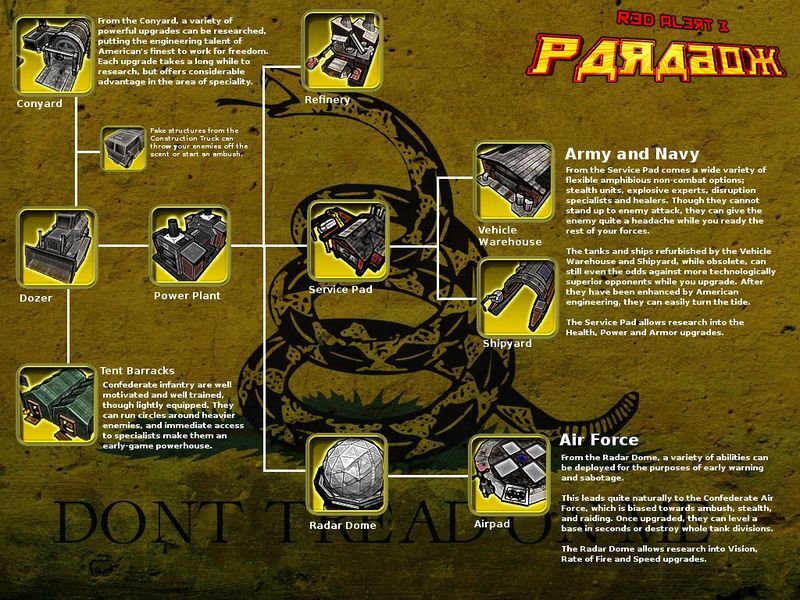 "Almost every nation claims to be for the people – to protect them, enable them, shield them from the dangers of the world. Yet really, once you come down to it...can anyone really comprehend the idea of “the people”? Not just a faceless mass of humans, statistics to be recorded down, things to be counted as resources when it comes to warfare and used or protected as needed...millions, billions of individuals with their own wants, their own fears, their own dreams. If those millions of people, each one individually decided to fight for something, against something as individuals for individuals... think how glorious and amazing their army would be."

Fake buildings are buildings created by the Construction Truck capable of imitating other buildings in the manner of the Spy, but by activating their special ability the disguise disappears and the units' function occurs. They are cheap and quick to build, so use 'em to throw the enemy off track. Fake Buildings have no sight radius.

(Yes, the icons are placeholders)

(Constructed at the Vehicle Warehouse)

(constructed at the Service Pad)

The Confederates have access to protocols through their structures. When built, a structure may grant access to one or more protocols. Some of these protocols can be upgraded. Upgrades are free, but take a very long time to complete.

Remember how RA1 used to feel? Well, the Confederates are known for using old Allied technology from the original Red Alert games, thus most of their units have a rusted, gritty feel to them.

Community content is available under CC-BY-SA unless otherwise noted.
Advertisement