"You may say that I'm a dreamer,
But I'm not the only one,
I hope someday you'll join us,
And the world will be as one."

- "Imagine" by The Beatles, written at the end of WWIII

The Allied Nations, also known as the Allied Forces, or simply the Allies, is a previously existing faction being expanded upon for Red Alert 3 Paradox. The original faction was designed and created by Electronic Arts. The Allies are a military alliance between the nations of Europe during World War II. By the time of World War III its primary members were America, France, Germany and Great Britain. It originally served as a unified military command of European armies. The Allies fought to protect the nations of Europe, and later, the world with about 60 member states with varying types of contributions.

The Allies are symbolized by a stylized silver bird-of-prey with a silver-and-blue triangle pointed downwards behind it. This is supposedly meant to represent freedom similar to how birds-of-prey fly freely in the wilderness.

At a Glance[edit | edit source]

"All that is necessary for evil to triumph is for good men to do nothing."

When Stalin's Red Army began its march against Europe in 1949, there was no united front against the Soviet Offensive except for a web of alliances held over from the imperial days of Europe. When Poland was brought to battle, Germany was obliged to join in, which in turn brought France and Britain into the war, and so forth. However, the vast disparities between equipment, ammunition, strategy and philosophy almost brought the newly united powers of Europe to their knees before Stalin's army.

Setback after setback plagued the European armies; Germany was still limited to a hundred thousand men, France insisted that their tanks remain attached to infantry formations, Italy refused to fight altogether unless highly specific and hopelessly obsolete obligations were met in their treaties. All the while the Red Army pushed deeper west, gaining huge amounts of territory and easily routing the lacklustre defence presented by the backward and inexperienced European forces.

They were saved by President Truman's radical decision to bring the United States out of its self-imposed isolation and into the war effort. Truman resurrected an old idea from his predecessor, President Roosevelt, tentatively called the United Nations, with a more warlike attitude. A new Alliance, more closely knit than any other, with one army and one purpose, to stand united. With Poland overrun and Germany rapidly falling to the Soviet juggernaut, the writing on the wall was clear for Europe's leaders.

By the signing of the historic Treaty of Geneva in June of 1950 by the four founders of the Allied Nations: Britain's Prime Minister Churchill, Germany's Chancellor Claus von Stauffenberg, France's Charles de Gaulle and America's President Truman; a complete restructuring of the various armies of Europe into a united combat force, a blue steel fighting machine to stand against the red iron of communism. Bowl helmeted American GIs fought alongside British Tommies, French Maginot Defenders stood side by side with jackbooted German shock troopers.

The entire war industry was totally reformed to the production of the most effective international designs like the German Mastiff or American Beagle, and within a year of signing the treaties, nobody could have recognized the army that stood against the Soviet forces. The powers of Europe and America had, for the first time in history, laid aside their differences and the result was the most powerful fighting force and industrial base in history. Over the next five years the Soviet Union was first stalled, then forced back into Russia. Though individually outmatched by the Russian T-40s and T-51 Anvils, not to mention the deadly JS-1 Elephant and JS-2 Mammoth tanks, the Allies could outproduce the Soviets and outmanoeuvre the sluggish Soviet armies. As the war dragged on the various elements of the war industry began to congregate into massive corporations, the most famous of which, FutureTech, invented the physics defying GAP Generators based on the notes of Albert Einstein, a famous scientist whose 1927 disappearance was considered one of the great mysteries of the early 20th century.

The GAP generator was the last straw on the back of the Soviet war machine, already suffering from the loss of air superiority to the British Hawker Jumpjet; the introduction of a machine that could hide enemy forces in plain sight left the Soviet Union completely unable to respond, even with their mighty Iron Curtain or fearsome Tesla Coils. However, there existed no means of striking the heart of the Motherland itself and the war had dragged on too long, for both sides, to have a truly decisive end either way. The war ended on Christmas Day, 1955, and European borders were the same as when the war started. Twenty million people had died for no gain of territory on either side.

During the war, the Allied leaders met in New York. This happened after the fall of Greece, making it imperative to the Allies to decide how to better fight the Soviet Union in the future. It was decided that a multinational task force would be assembled with the best equipment, finest trained soldiers, and best available resources. Initially called the Global Defence Initiative, it was quickly renamed to the Peacekeepers, keeping in line with the Allies' image of peace loving nations. While the bulk of the Allied military strength would still be in the national armies of its member states, the Peacekeepers were mobile enough to be taken from theatre to theatre.

After Second World War, it was generally thought that the Allies would dissolve, but the rather militant and slightly paranoid government of Germany and the violently anti-communist administration of President McCarthy helped to keep the Allies together through the peacetime. Though all Allied leaders were accused, at the time, of paranoia, the successor to Stalin after his mysterious death, Cherdenko, validated their fears, as the new Premier seemed all too eager to once again plunge the world into war. However, around the same time the death of President McCarthy lead to a rise in isolationism in the United States, and their partial withdrawal from the Allied Nations. Whatever happened next, the Allies would face it with their most powerful member on the sidelines, at least at first.

The Allies were the first faction to be released on July 4, 2010 along with the Confederates.

The faction, including the new elements from Red Alert 3 Paradox, will have a total of 13 buildings, 7 defensive structures and 51 units (10 Infantry, 12 vehicles, 8 experimental vehicles, 8 aircraft, 5 heavy aircraft and 8 watercraft). 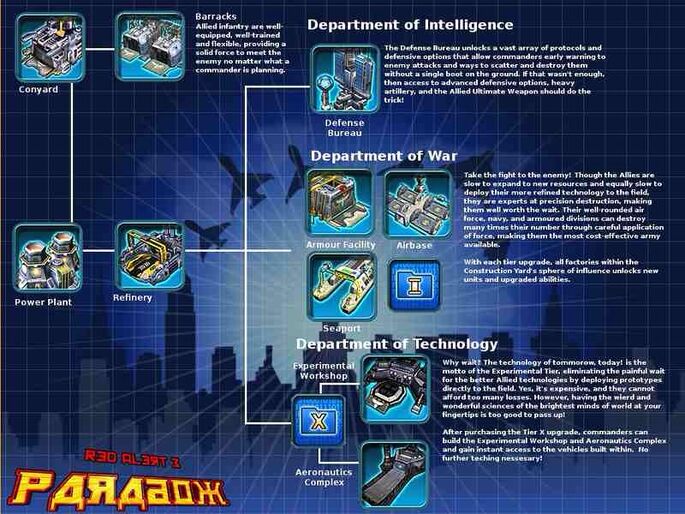 "The Global Liberation Army has a nickname for when an Allied strike force is coming to attack one of their bases: they say the Sandstorm is coming. The North Vietnamese refer to a Typhoon; the American revolutionaries call it a Hurricane. They all fit, for an Allied Peacekeeping Force in battle is akin to vengeance from the heavens. Men are swept away before it, pin-point strikes take out vulnerable areas of the enemy no matter how far away they are, the skies themselves turn upon the ground and wipe away even the most protected of positions. And when the offenders have been destroyed by the fury of the storm...it moves on."

Elements in italics in the list designate Paradox-Exclusive units and structures.

(Built at the Experimental Workshop)

New to the Allied army is the experimental tier of vehicles, all of which are built at the Experimental Workshop. Warning: These vehicles have not been thoroughly tested, so please use them with caution!

(Produced at the Aeronautics Complex)

BCN News, July 4 1969: A seemingly common news report, but it contains some rather delicate information for the Allied citizens.

Retrieved from "https://paradox-modfanmadebackup.fandom.com/wiki/Allied_Nations?oldid=9151"
Community content is available under CC-BY-SA unless otherwise noted.